Welcome to “Profiles in Social Media”!

This brand new series of interviews are an evolution of the “Twitter: How I See It” Interviews, and will be a regular feature of my blog. Since the first “Twitter: How I See It” interview in April, I have received a great deal of feedback from everyone, allowing this series to grow and evolve. The “Profiles in Social Media” interviews are in a brand new format, and will cover all aspects of social media. In this series, we will talk with people who use these services in unique and effective ways. As a result of reader suggestions, I have also made several changes to the format of the interviews, and I’m happy to announce that all future interviews will be RSS Reader friendly! 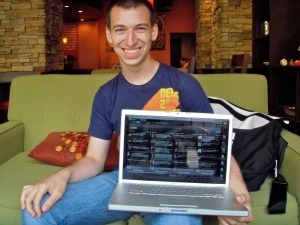 Alex: I signed up in 2007 when I was in Japan. It was my summer between high school and college and it was the “new” thing at the time. I didn’t really start using it actively until the summer of 2009. I was helping the American Legacy Foundation with their social media strategy for the TRUTH campaign.

A: I like the way it breaks down barriers. Through Twitter, I have met people that I would have never been able or even thought possible. Social media has opened a lot of doors for me – jobs, internships, and even speaking events. Being active on Twitter has also helped to expand my social circle. I came to DC from Kentucky and really didn’t know many people here. Now, I have over 2700 friends and it’s all thanks to Twitter. This service really helps making real life connections easier.

J: Has Twitter changed your internet usage or presence?

A: Absolutely. I’m on the internet 99% of the day now. Even biking to work I listen to Internet Radio. I try to remain connected to the internet as often as possible and through use of my iPhone I am able to be connected on the go. Disconnecting regularly, however, is something that everyone needs to do, otherwise you will burn out. I make sure to be active in every social media platform possible. You never know what new platform will be the next big thing and I cannot afford to miss out on that.

A: Social media has made me much more active in networking. It helps make networking much easier and more natural to do. You can prove yourself to people you want to meet without really doing anything different. My networking style has evolved into a three tier system thanks to social media. Stage One is Twitter, the introduction. Once I get to know someone, then I move to Stage Two – LinkedIn. Finally, if I really connect with someone, it’s Stage Three – Facebook. This tiered approach allows me to keep my professional and personal life separate.

J: How do you see Twitter evolving in the future?

A:I truly believe that it will become the “pulse” of the planet. Just look at the volume – 2 billion tweets total and over 3000 tweets a second. That is an extensive amount of information! Twitter will need to be able to “cut the chaff” and bring the important information to light and give it to the people that want it. Otherwise, the service will eventually become too large and unmanageable. Twitter is a unique platform that will change the way we look at internet marketing. Twitter can make advertising personal and make people feel like they are part of a conversation rather than a one way message.

A: I am inspired by everything. I follow @Mashable and @Techcrunch very closely, as well as multiple gadget blogs. I am a huge fan of Google reader which allows me to read at least 20-30 newsletters a day. If a story piques my interest, I will post an article about it on my blog. I blog to share new content that I think is important to my readers. Twitter allows me to learn from others and share what I find.

A: Twitter is just like any other form of marketing. Not all companies should be on Twitter, however, the companies that are seem cooler to me. If I have a bad experience and tweet about it and the company does not respond to me, it affects my decision to do business with them again. However, if a brand reaches out to me I am more willing to try them. I appreciate their effort and want to reward them for “choosing” me. Starbucks is a great example on how to make Twitter really work for a business. They put a lot of time and effort into their Twitter account and it shows. They communicate about their brand and it helps make them shine brightly.

J: What has been your coolest experience on Twitter?

A: I hosted a Social Media Breakfast and we ended up talking about the Facebook group Save Screen on the Green. Screen on the Green is sponsored by HBO and shows free movies on the National Mall in DC. HBO was considering shutting it down. We were all tweeting about it that morning and I asked the HBO Twitter account if they were listening. To my surprise, HBO replied! They sent me an email address of someone in the marketing department. I began communicating directly with the marketing department contact to convince them that they should keep this service going. Without Twitter, this line of communication would not have been opened.

J: What are your recommendations for someone getting started on Twitter?

A: Don’t hesitate to follow people you are interested in. You have to be considerate but also persistent in your efforts to engage others. Don’t worry about follower counts. Worry about your message instead. Be patient; if people like your content, in time you will gain followers. If you don’t like sharing information, Twitter is not for you. Twitter is for sharing and you get out of it what you put in. You have to be active on Twitter to make it worthwhile. Also, use a Twitter client like @Tweetdeck- it is much more efficient than using the Web interface!

Note: Alex’s responses has been paraphrased from our in person interview.

Alex Priest is the Social Media Director at TechChange as well as the Marketing Intern at the Consumer Electronics Association. Prior to that, he has worked for both the Senate Majority Leader communications office as well as the MS&L Agency. He is currently a senior at American University where he is pursuing his BSBA in marketing, public communications, and statistics. A very active traveler, he has lived both in Japan and Denmark. He currently resides in the metro DC area. You can find Alex on his blog- http://www.alexpriest.com

One response to “Profiles in Social Media with Alex Priest”